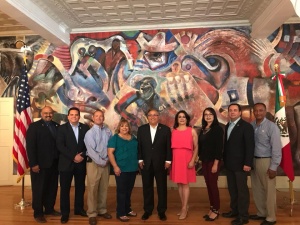 On Friday, September 27, Mexicali was the host of the first mayor’s summit. The event gathered the mayors from Imperial Valley, Yuma, Somerton, and San Luis, Arizona and Sonora. This was the first event of its kind that has been hosted in Mexicali to set a working agenda among them to solve common problems.

The Mayors met early in the morning at the Mexican Consulate in Calexico where they were transported to Casa de la Cultura. In there, the program began by taking the official Summit picture.

Mexicali Mayor Gustavo Sanchez said that this summit was a step in the right direction for the region and having this conversation when NAFTA is being renegotiated and coordinating public safety communication between their police departments is something they look forward.

The working session took place as the mayors spoke to discuss security, economic development, and environment. At the end of the working session, they signed a Memorandum of Understanding agreeing on the issues they discussed.

Mayor Gustavo Sanchez has built a relationship with the Imperial County Board of Supervisors and recently signed a sister cities agreement with Calexico. Mayor Sanchez has also visited the Mayor of Phoenix to promote Mexicali and started a relationship with Yuma Arizona. Yuma Mayor Douglas Nicholls said that this summit is beneficial for the region and believes this summit will make Mexicali a stronger player in the 4FrontED.