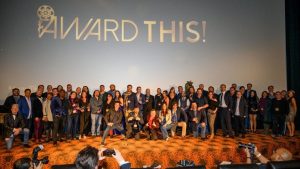 Indie film champion, Film Threat, led by founder and filmmaker Chris Gore, and in conjunction with their partner Magical Threads, will host an incredible celebration of truly independent films with the return of Award This! Award This! returning for its third year is happening very differently in 2021 and will continue its mission to celebrate unsung achievements in independent film.  This years’ Award This! will take place at a drive-in in conjunction with the Frida Cinema at the Mess Hall in Tustin, CA on Saturday, April 10th (limited tickets available at AwardThis.com), and their virtual event for global audiences everywhere can be seen on Sunday, April 18th and it’s free to register in advance.

Beloved indie veterans, comedians, and stars will join us as we honor the creative excellence of deserving indie films, across several bold and diverse categories including Indie Sci-Fi, Indie Horror, Indie Comedy, Indie LGBTQ+ Themed Film, Indie Action/Thriller, WTF Indie like “What the Fuck is This Movie Even?”, Sports Documentary, Pop Culture Documentary, Socially Relevant Documentary, Ensemble Cast, Best Director, Best Directress, Indie Made for Less Than the Contents of an Oscar Gift Bag (Under $100K), and Indie Movie of the Year. The Award This! “voice of God” aka show announcer and epic voice guy, Jon Bailey (“Transformers: Combiner Wars”), will get the party started for a rollicking indie award show.  Award This! sponsors and partners include Filmocracy, the Frida Cinema, Storyblocks, Artist Vodka, and charity HashtagLunchbag.  Nominations for the 2021 Award This! will be announced on February 17th, 2021.

“Coming out of a year where our world changed so dramatically, we are thrilled to honor the creativity and ingenuity of indie filmmakers, who persevered – adapting to get their films out to audiences,” said Chris Gore.

Film Threat’s Award This! is an event with a clear mission — to champion independent films in a variety of exciting categories to bring greater awareness to the growing number of exceptional independent films available on numerous platforms including VOD and streaming services. Recognizing these films during the height of award season creates well-deserved visibility for these artists and creators.