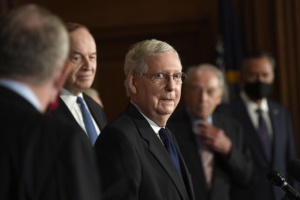 Mitch McConnell said he is “prepared to support” a coronavirus relief agreement when Democrats and the White House reach one.

The sides appear to have moved toward a consensus on small business aid and stimulus checks but remain divided over unemployment insurance, aid to state and local governments, and rent, mortgage, and food assistance.

The $600-per-week federal unemployment benefit and a moratorium on evictions from federally backed housing have expired.

“It has now been more than a week since Senate Republicans released a serious proposal for another major rescue package. A trillion dollars for kids, jobs, and healthcare. But Democrats are blocking it all. It’s like they expect applause for merely keeping a civil tone with the President’s team, never mind they’re still obstructing any action for the country.”

“Senate Republicans want to revive a federal add-on to unemployment insurance which the Democratic Leader would not let us extend last week,” McConnell said. “We want to send another round of direct checks straight into families’ pockets. We want to supply generous new incentives for re-hiring American workers and workplace safety.”

The unemployment benefits expired on July 31st with no deal reached by Republicans and Democrats.

By Tuesday morning, the parties had come close to a consensus in only a few areas, such as extending funding for Paycheck Protection Program loans for small businesses. However, they haven’t been able to agree on the unemployment extension nor evictions from federal housing.