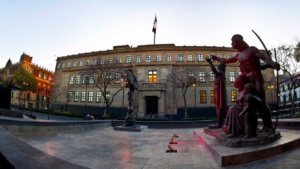 The Plenary of the Supreme Court of Justice of the Nation, unanimously determined the reform to the transitory article 8 of the Baja California constitution as unconstitutional, which contemplates the extension of the term for the state governorship from 2 to 5 years, regarding the election of July 2, 2019. Therefore, before this official resolution, the Governor of Baja California, Jaime Bonilla will remain in office until November 2021.

After the project presented by the Minister José Fernando Franco González, in which he pointed out the constitutional invalidity of the reform approved by the XXIII legislature of the state of BC, among other reasons, and was contrary to the provisions of the federal constitution, regarding the times and the forms in which the law initiative must be presented, prior to the electoral process.

During the session, the emphasis was placed on the non-viability of the reform, since it must be presented at least 90 days before the citizen’s vote, and it does not contemplate a possible gap to be carried out after the election, and even less so when the electoral justice court of the state, reviews the conditions under which the election process took place, and grants its validity, establishing in this case, the two-year period, which was officially scheduled.

The Federal Court stressed that it is not possible to simulate the popular will through consensus or citizen consultation since suffrage is the only legal instrument to do so. Therefore, the congress of a member state of the federation cannot use its powers to modify the periods established for a position of popular election, in a timeless or transitory article.

Finally, the ministers reiterated their commitment to the citizen’s trust and respect for the rule of law, with legal certainty being one of the fundamental principles that constitute the Magna Carta, which governs the ways and times in which campaigns, elections, and periods of transition must be carried out, in order to guarantee their bases within the democratic system.