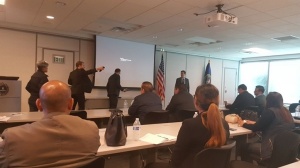 As part of the anti-crime strategy through new technologies agents that will integrate the State Preventive Police in Baja California’s (PEP) Cyber ​​Police of Tactical Analysis Unit received training by the Federal Bureau of Investigation (FBI) to prevent and combat these crimes, said the Secretary of Public Safety of the State, Daniel de la Rosa Anaya.

He said that agents were given a course called “Analysis and exploitation of social networks and advanced techniques of internet search” at the facilities of the North American corporation in San Diego, California, where they were trained to carry out patrolling in the network to detect sites, processes and probable people responsible of committing of illicit.

De la Rosa Anaya indicated that during the course agents learned new tools to identify profiles of probable criminals that operate in social networks for sale of drugs, weapons, and sexual exploitation.

Among other actions they were also trained to prevent electronic fraud, identity or personal information theft, which will help them guide citizens involved in this type cases.

Likewise, the head of the SSPE pointed out that the exchange of information, technology, analytical work and coordination between authorities in both countries is an effective strategy to combat crime and even more in a digital age, so they must have trained officers in the management of new information platforms.