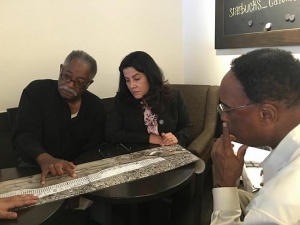 After years of working for the county and being considered by many as the driving force in economic development in Imperial Valley, Esperanza Colio-Warren has been promoted to be part of the county administration team and will work along with County Executive Officer Tony Rohoutas to move the county forward with growth and improvement.

It was announced in a press release dated July 26 that Esperanza Colio-Warren was appointed as the new Imperial County Deputy CEO and her term will begin August 2nd.

Colio-Warren has worked as Director of Community and Economic Development at the county and has been successful in bringing millions of dollars in funding from the Economic Development Administration, Community Development Block Grants, and other funding that has helped the residents of the unincorporated areas of Imperial Valley. Her work as economic development director for the county has been successful in creating avenues for investment and helping the cities with resources so they can attract new businesses to locate in their area.

She has a bachelor’s and a master’s degree in Public Administration from San Diego State University.  Esperanza is married and has a son, Ivan, who’s attending college at California State University, Chico. She has worked for the Imperial Valley Regional Occupational Program, California Student Opportunity and Access Program, and the Committee of Tourism and Conventions in Mexicali.

“It is a pleasure to have Esperanza working with the team in a new capacity,” stated CEO Rouhotas.  “I have had the opportunity to know and work with Esperanza since 2007 and she has always been great to work with and always has the community’s best interest at heart. This is evident in the many projects and funding sources that she and her team have tackled and brought to this County. I am confident that she will exceed our expectations in her new role while bringing more opportunity to the people of this County.”

Colio-Warren stated about her appointment, “I am grateful and excited for the opportunity given to me to be part of the Imperial County Executive Office team.  Thank you for having faith in me and my capabilities.  I look forward to all of the excitement and challenges that lie ahead.”