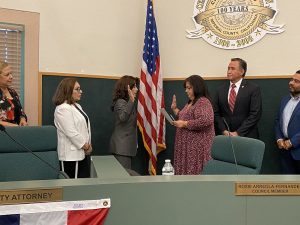 Esperanza Colio raised her right hand to take her oath of office from City Clerk Gabby Garcia, as she finished her oath, the people at the city council chambers gave her a standing ovation cheering her arrival in Calexico.

It was a special meeting for the Calexico City Council as Colio-Warren became the second woman to hold the position of City Manager after a swearing-in ceremony held on July 7. But everything went sour as the rotation of Mayorship was put in question since Javier Moreno will have a second consecutive year as Mayor, something that many residents considered to be erroneous.

Colio was one of the applicants to fill the vacant city manager position after Miguel Figueroa decided to leave for Imperial County last month. The decision was seemingly easy for the council since they decided at their May 12 special meeting.

Colio-Warren has been a County employee since the spring of 2004, serving as the County’s Community and Economic Development Manager for the past 14 years.

As the Community and Economic Development Manager, Colio-Warren functioned as the County’s premier grant writer and steadfastly pursued potential funding sources to develop, restore, and expand infrastructure projects in support of business and/or community development, securing more than $40 million in state and federal grants for the county, according to the release.

During her tenure, she worked with federal, state, and local partnering agencies on funding and regulatory assistance for infrastructure projects for community services districts and utilities in the unincorporated areas of the county, prepared grant proposals, implemented grants, coordinated economic development opportunities with cities and agencies, such as Enterprise and Opportunity Zones, and managed the Imperial Valley Foreign Trade Zone, the release said.

Colio-Warren is a resident of El Centro and received her bachelor’s and master’s degrees in Public Administration from San Diego State University. She is married and has a son, Ivan.

The council agenda also had the rotation of the Mayorship in which the council selects a Mayor and Mayor Pro Tem. To the surprise of those in attendance, there was a motion by Councilman Raul Ureña and Seconded by Gloria Romo to keep Javier Moreno as Mayor for a second year. This caused a stirred controversy among the public saying that Camilo Garcia should be Mayor since he was next in line.

Those against the reappointment argued that there was collusion between Moreno, Romo, and Ureña and accused them of backdoor politics. After more than an hour of heated debate, the majority of the council appointed Moreno to be Mayor until 2023 and Raul Ureña as Mayor Pro Tem.