Erik Ortega Elected President of IID Board for 2019 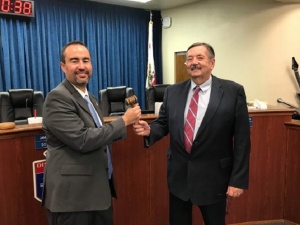 The Imperial Irrigation District Board of Directors held its reorganization ceremony and chose a new President and Vice-President.

At the Dec. 18 meeting, the board selected IID Division 4 Director Erik Ortega as the new Board President for 2019 and IID Division 5 Director Norma Sierra-Galindo as Vice-Chairman.

“Over the course of this year, the board faced many complex and challenging issues but we were able to work together and move the agency forward, not backward,” President Ortega said in his remarks and thanked outgoing President James Hanks for leading the board in 2018.

“As an agency, the IID often finds itself dealing with the next challenge and next critical decision, the next year won’t be any different. IID is leading the way in renewable energy, public benefit programs, water conservation programs, and much more. So let’s continue to build upon this foundation and most importantly, to remain united,” Ortega said.

Vice-President Norma Sierra-Galindo thanked the employees of IID for their dedication and said she will continue to be an advocate for them.

“I will defend our water rights in as much I have been able too, I will not back down, and I will continue to advocate to have the lowest rates of power in California and I’m looking forward working with a united board,” Vice-President Galindo said.