A group of women was blown away, not by the 10 miles an hour wind that took place the evening of May 28, but by a panel and networking that happened between local business women that by sharing their experiences and struggles motivated themselves to pursue their dreams and become better people.

This was done thanks to the group “Entre Amigas” that hosted their event on the rooftop of the Courtyard Marriott in Mexicali. Erika Castillo, the founder of this group, said that the purpose was to give the attendees the tools they need to be successful and connect with other women entrepreneurs and their personal stories of success.

“We want them to come and network so they can get the tools to take their business to the next level,” said Erika Castillo, founder of Entre Amigas.

The group plans to survey the attendees and decide the next steps for their future events and in what format to do it. The group has a presence in all of Baja California and California as well.

Karla Nieblas, owner of Me in Balance, was one of the sponsors of this event and spoke about the importance of following your passion.

“My message for everyone is that we bring out our courage and do what we are passionate about because one thing is for certain: change is inevitable, and we need to do what we love,” Nieblas said.

Yaneli Orozco from Globo Rosa was also a sponsor and does decoration for events with balloons for any kind of event and brought a dessert table. She started her business as a hobby a year ago due to her love for decorating. Little by little, she was encouraged by her friends to start her business and took a chance at it.

“I had my doubts at the beginning but I took a chance,” Orozco said, “So that’s my message, don’t just stay with the desire, you don’t lose anything by starting a business and with hard work, you can be successful.” 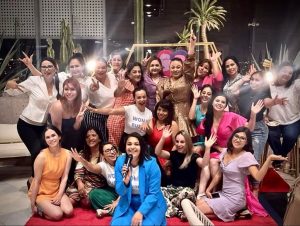 Erika Rodriguez from Chula’s Boutique has been part of this community and is thankful for joining the group because of the support she has found.

“The type of training provided by Entre Amigas is very complete since it makes you work in different areas so you can grow in all aspects of your life. That’s why I invite you to come to join our events so you can discover all your abilities and share them with other women,” Rodriguez said.

Beyond Borders Gazette Publisher, Ellie Burgueño was invited as a speaker and gave a conference.

Through networking spaces, training, and face-to-face and online events, they became the most important platform for women and economic empowerment in the Northwest region of Mexico and Southern California, achieving a positive impact on the lives and economy of thousands of women.