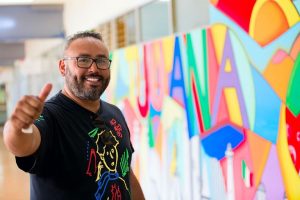 Urban art has had a great track record in both culture and economics. The concept of street art includes graffiti and works such as sculpture, lighting displays, and wall murals.

Public art is the pushing of boundaries by presenting art in public contexts, outside of museums and galleries. Tijuana is seizing the opportunity.

Mexican Artist Enrique Chiu will unveil the Mural inside the Municipal Palace of Tijuana. This is a legacy for the city in such a symbolic and historical space of the state.  The mural is named, Contemporary Tijuana.

This is the new symbolism of the city in a more figurative, colorful way that has been captured in these times through art, icons, and monuments that enhance the city, creating memories, some symbolic images of people, trades who have excelled as athletes, media, police, firefighters, workers, doctors, migrants, chefs, and artists. Thus creating in that space a place to enjoy it, feel the colors, and take a picture to show off the city.

The only Mexican migrant and artist authorized to paint on the border wall, to date, he has more than 300 murals in Tijuana and nationally, promoter of our culture internationally, ambassador of peace, advisor, and defender of human and migrant rights.

His activities include being President of the EC International Foundation for a childhood with a future A.C.  which is dedicated to the promotion and artistic education for children and young people in several states of the country.

Chiu has a Bachelor of Design and Audiovisual Arts from CCSA Santa Ana, California. His pictorial work has been exhibited in galleries in Mexico, E.U.A, Europe, the Middle East, and South America. His work is exhibited permanently in Museums in the United States, Spain, Guatemala, and Mexico. Creator of the Mural of the Brotherhood in the USA / MX border wall. Aspiring to the Book of Guinness World Records for the largest mural in the world in 2018.

Recognized as a figure of the arts in Latin America, Enrique Chiu is considered one of the outstanding young artists not only in the border area but internationally, is one of the main promoters of artistic development in communities in southern California, USA, and from some international locations such as Argentina, Mexico, El Salvador, Peru, Spain, and the Middle East.