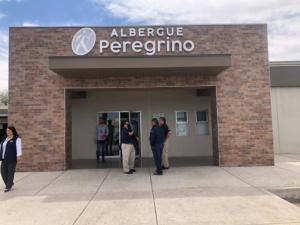 The municipal government, represented by the mayor, Gustavo Sánchez Vásquez, as well as his wife, president of DIF Mexicali, Margarita Flores de Sánchez, announced today, Thursday, June 13, the start of the Prevention Program for heat stroke, in Albergue Peregrino, located on Rio Nuevo Road, at the corner of CEART Mexicali.

Both highlighted the work that this shelter has had over 6 months, in which it has served about 10,400 people, and that from this June 13, in addition to assisting Central American or deported migrants, will expand its schedule of attention, to serve as refuge to people in street condition, due to the high temperatures.

The DSPM, noted that the 1,900 police elements are instructed to serve anyone who may require shelter, for being exposed to intense heat. He pointed out that the offer is a civic duty, but it is a voluntary decision to agree in using the shelter.

For its part, Civil Protection indicated that they expect around 40 days with more than 43 C (115 F) degrees, so he invited the community to show solidarity with this cause, and call 911 to make a report of anyone in a vulnerable situation.

Finally, the municipal president, Gustavo Sanchez, highlighted the efforts that have been made both by the Municipal DIF, as civil organizations and citizens to enable the Peregrine Shelter, which will remain open throughout the summer, from 11 am until 7 am the next day, where users can bathe, sleep, receive breakfast and medical attention.