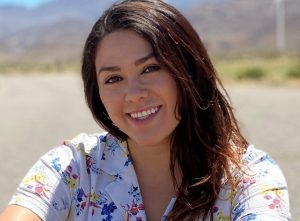 Elizabeth Espinoza, Imperial Valley College’s Interim Communications and Governmental Relations Officer, has been selected as “New Pro of the Year” by the San Diego and Imperial Counties Chapter of the Public Relations Society of America.

The honor, one of six annual special awards from the PRSA chapter, is given for exceptional public relations work by a professional with five or fewer years of experience in the industry. Espinoza, who assumed the IVC position in September 2019, was honored for her work in managing the college’s internal and external communications needs during the COVID-19 crisis.

She also was singled out for her communications work during IVC’s recent ransomware attack as well as stepping into a leadership role to assist in advising student government regarding conduct and student discipline in early 2020.

Espinoza, a graduate of Southwest High School in El Centro, began her college education at IVC and San Diego State University in the Imperial Valley University Partnership. After receiving her bachelor’s degree in political science, she continued at SDSU and received a master’s degree in homeland security.

Shortly after Espinoza was hired at IVC, she stepped in for a brief time as a primary student advisor, supervising student government as well as student conduct and discipline when the person in charge of that area went on short family leave. This was in addition to her regular public relations duties.

Right after the dean returned, the Covid-19 crisis hit. Espinoza developed the college’s crisis communications plans for campus closure, working with IVC’s president and leadership team in all of the communications aspects dealing with closure, the transition to online learning, and virtual graduation.  She also serves as IVC’s representative on the Imperial County joint information group, made up of PIOs from all local agencies.

In August, just before Fall classes were to resume, IVC was hit with a ransomware attack. Espinoza planned and implemented the campus’s internal and external crisis communications response.

She joined the PRSA chapter board in January 2020 as its New Pro representative and is continuing in that capacity this year.

Until Espinoza joined the staff of IVC, its public relations had been handled under a contract with Reliance Public Relations since 1998.

“As IVC grew, it became evident it needed a full-time public relations office and Elizabeth’s hire is the first step,” said William Gay, president of Reliance. “All of us at Reliance are proud of her accomplishments and are thrilled with her award. She is indeed a rising star in our profession.”

Espinoza thanked IVC for the opportunity to begin her public relations career and she expressed excitement about the future.

“I am proud to be part of an institution that sees and supports the vision of a new, young PR pro,” she said. “My career is just getting started and I can’t wait to see what the next 10 years will bring! I have so much more to learn and will embrace the changes and challenges that come with this work.”