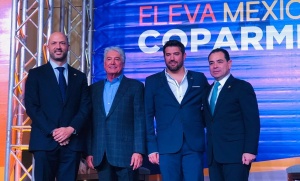 At 08:30 o’clock this morning the long-awaited Forum Eleva Mexicali 2018 began, this event is topped up by offering speakers of international stature.

In the framework of the 60th Anniversary of Coparmex, a special edition of Eleva was held with 8 different events divided around the year, with highly relevant content, innovation, technology, quality of life, a culture of legality, agro-industry and high impact entrepreneurship.

During the opening of the event Mr. Ernesto Elorduy explained the importance of holding quality events that pay for the construction of greater potential and growth for Mexicans, that is why he shared with the audience the event calendar, starting with Gustavo and Tavo Vildósola with “The Career of Businesses”, Esther Wojcicki with “Learning to learn by changing education”, Ana Victoria García and her speech titled “Womenpreneur: Entrepreneurship for and by women”, Carlos Drombo with “Big Data and collaborative economy”, Javier Solórzano with the message about “Mexico the transition …” and concluding with Leo Zuckerman with “perspectives of Mexico”.

For his part, Rodrigo Llantada Ávila, President of COPARMEX Mexicali, addressed the attendees with important reflections on the corporate and civic responsibility that each Mexican has. He made a remembrance of the struggle for transparency and the fight against corruption, a national flag that was prosecuted throughout the COPARMEX and he assumed with conviction in the Business Center of Mexicali. He explained the situation that Baja California is facing regarding the C5i center and the appointments that must be given in a legal and correct way through the State Anticorruption System.

“We must assume our active role as promoters of change requested by our society, we started a series of battles that have not been simple but we cannot let go, today we have made progress in the anti-corruption system but it has not been enough, we’re not going to allow something designed to combat the bad acts of the authorities to lose direction, “said the President of the Coparmex Union.

During the event, there was an exhibition room with more than 60 participating companies and more than 5,000 attendees.