Electoral College confirms Joe Biden as the next president 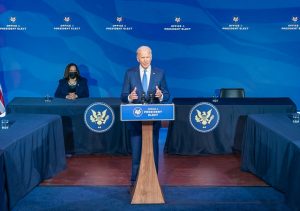 The Electoral College formally chose Joe Biden on Monday as the nation’s next president, giving him a solid electoral majority of 306 votes and confirming his victory in last month’s election. The state-by-state voting took on added importance this year because President Donald Trump refused to concede that he had lost.

In a speech Monday night in Delaware, Biden issued a stern condemnation of Trump and his Republican allies — including 17 state attorneys general and 126 members of Congress who backed a baseless Texas lawsuit seeking to undo other states’ election results — for seeking to undercut the democratic process.

He condemned attacks by Trump and his supporters, who have sought to throw out legitimately cast ballots, on state and local elections officials.

“It is my sincere hope we never again see anyone subjected to the kinds of threats and abuse we saw in this election. It’s simply unconscionable,” Biden said.

As of today, President Trump has not conceded defeat and has remained silent. He has contested the results in several states but the results stay the same.

Biden also noted that he won by the same electoral vote count that Trump received in 2016, saying that it was a “clear victory” then and now.

“If anyone didn’t know it before, we know it now. What beats deep in the hearts of the American people is this: democracy. The right to be heard. To have your vote counted. To choose the leaders of this nation. To govern ourselves,” Mr. Biden will say. “In America, politicians don’t take power — the people grant it to them. The flame of democracy was lit in this nation a long time ago. And we now know that nothing — not even a pandemic —or an abuse of power — can extinguish that flame.”

Biden said that now it is time to turn the page and work for the American people regardless if they voted for him or not.

“In this battle for the soul of America, democracy prevailed. We the people voted. Faith in our institutions held. The integrity of our elections remains intact,” Mr. Biden plans to say, according to excerpts of the address released by his transition office. “And so, now it is time to turn the page. To unite. To heal.”