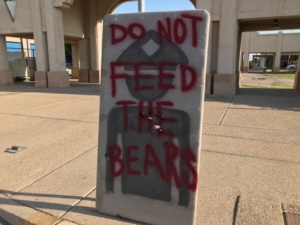 The Calexico Police Department is asking the public not to give money to homeless people they see on the streets.

The growing homeless problem can be seen in cities like Calexico and El Centro where an increasing amount of transients are seen camping in parks, public areas, and road intersections causing a nuisance for people going by. While cities and local non-profit organizations are trying to solve this situation, the El Centro Police is asking people not to give monetary help to them.

The El Centro Police Department wrote on their Facebook page that they have received a number of calls regarding issues and concerns involving people from the local “homeless” population.  The calls range in severity from simple concern and illegal camping to aggressive panhandling, drug use, theft, and even acts of violence.

“This is evidenced by a handful of recent unprovoked attacks on members of the community and is a tremendous cause for concern.  Addressing the issue of homelessness is not a simple task from a law enforcement perspective,” the post reads.

El Centro Police argued that simply giving warnings, tickets, and arresting people from this particular demographic does little to mitigate the true problems typically associated with it.

“We, at the El Centro Police Department have taken a proactive approach to the issue and have been involved with several local agencies, non-profits, and our code enforcement.  We have been met with mixed results however, food, shelter, clothing, medical care, and family reunifications have all been proven valuable tools which otherwise would not be at our disposal.  Academia and government have both studied the issue and one of the contributing factors is the availability of handouts from the public, more specifically monetary handouts.  Being able to panhandle for loose change only perpetuates many of the problems facing the homeless community.

Instead, please consider donating to local agencies and nonprofits who are dedicated to assisting and remedying the issue with homelessness. We assure you we will continue to enforce the appropriate laws but ask that you consider this request in helping address the issue.”