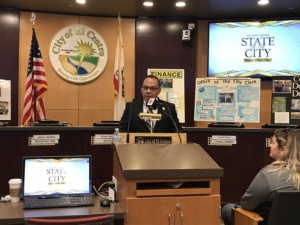 El Centro Mayor Efrain Silva took the podium to proudly announce the accomplishments made this past year and the plans for the future.

Mayor Silva gave his State of the City Address Jan. 30 before dignitaries from all the cities where he thanked the council and city staff make El Centro do “extremely well” by improving the quality of life for residents. Silva spoke about Measure P and how it’s helping the give with its future projects.

In November of 2016, El Centro residents approved Measure P.  This measure increased the sales tax rate effective April 1, 2017.  The purpose of the tax is to address major capital needs within the City.  The annual revenue from this tax is estimated to be approximately $5 million.

“We have prospered a lot mostly because of Measure P and the financial resources that we have at our disposal,” Silva said.” We have improved our parks and streets, our infrastructure, economic development, and Measure P will continue to help us match forward with many projects,”

The challenge of the city will be its finances in the coming years where the general fund will have to be analyzed to avoid an economic crisis.

Silva also mentioned the opening of new businesses such as Habit Burger, Panera Bread, and Khan Korean BBQ. Among the upcoming openings in El Centro will be a Hilton Hotel, Wendy’s, and La Resaca that will open in downtown El Centro this year.

Silva has been a strong advocate of having a strong binational relationship with Mexicali. In 2015, El Centro and Mexicali signed a sister city agreement. Silva restarted that relationship with Mexicali Mayor Marina Del Pilar. Recently, both governments celebrated their partnership by having El Centro Regional Medical Center donating medical equipment to Hospital General and DIF.

“We are working on special events and there are great opportunities in the future for both cities and there are great things ahead for both cities in the future,” Silva said and added that he wants El Centro to have greater participation with the 4FrontED binational region and will ask the council to be part of the Global Cities Economic Partnership.