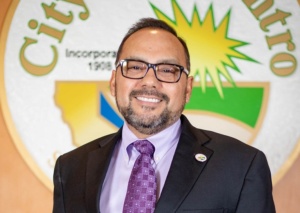 A new year for the city started as Efrain Silva became the new Mayor of El Centro Tuesday night.

In a special ceremony of the El Centro City Council, Efrain Silva was selected by a unanimous vote to lead the city in 2020. Silva replaced Edgard Garcia as Mayor during the meeting held on Dec. 4.

Councilman Jason Jackson will be the Mayor Pro Tem.

“I’m proud to be the Mayor for the third time and work with the council to improve the quality of life for the residents of El Centro,” Silva said.

Outgoing Mayor Garcia said that El Centro is in good hands with Efrain Silva since his leadership will help the council achieve its goals.

“I’m proud of what we accomplished as a city during my year,” Garcia said. “Efrain has a lot of experience as a councilman and I’m proud of him and we will be working closely together.”

Councilman Tomas Oliva agreed, “Efrain is someone that has a lot of experience and he is someone I want to l learn from this year.”

Former El Centro Mayor and current County Supervisor Ray Castillo said that great things are coming for El Centro since the council works well together as a team.

“I’ve known Efrain Silva for many years and I’m proud of what he has accomplished as a councilman and I congratulate him for his Mayorship,” Supervisor Castillo said.