Dr. Martha Garcia was selected as the new IVC President 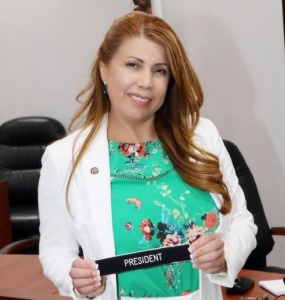 The publishing business has given us the opportunity to meet several amazing people, among those is Martha Garcia, who we met about two years ago.

Dr. Garcia captivated us with her charming and friendly personality, ever since we met we became good friends, she’s certainly a bright, hard-working and dedicated person who not only loves and feels strongly passionate about what she does, but she has also been one of the local role models that have succeeded and has continued to be a humble, attentive and caring person towards others and particularly to her community.

A historic event was announced the night of May 16th: Martha Garcia, Ed.D., was selected as the ninth superintendent/president of Imperial Valley College, who will take office on July 1 and will be the very first woman to lead the college.

The IVC Board of Trustees selected Garcia in a unanimous vote Wednesday.  She will be replacing Victor Jaime, Ed.D., who is retiring June 30 after 38 years at the college including the past seven years as superintendent/president.

Garcia was among the five finalists for the position who made public presentations May 1 at the college. Others included Robert A. Frost, Ph.D., currently (interim) dean of the John Adams Campus of City College, San Francisco; G.H. Javaheripour, Ed.D.,  currently Yuba College president; Christopher Villa, Ed.D., vice president of Student Services at Los Angeles Mission College and Wei Zhou, Ph.D., past president of Crafton Hills College.

Before becoming an administrator, Garcia was responsible for developing and coordinating a $5.8 million California Career Pathways Trust Grant that enabled Imperial Valley College to create Peace Officer Standards and Training (POST) Level One Academy. She also developed a multitude of categorically funded programs that focused on serving minority and underrepresented students.

She has secured more than $14 million for Imperial Valley College, since 2009.

Garcia has been employed at Imperial Valley College since 1999 and has held several positions under Student Services and Academic Services.

She serves on various community organizations. She is a board member for Justice for Our Neighbors; Live Your Dream Scholarship coordinator for Soroptimist International of El Centro and a member of Imperial Valley Breakfast Rotary.

Last Friday, Garcia participated in the IVROP Community Foundation’s “Dancing with the Stars Gala.” Moreover, she was honored as a 56th California Assembly District “2018 Woman of the Year.” She was commended for her commitment, tenacity, and leadership to improve our community through continuous leadership efforts. Finally, Dr. Garcia enjoys traveling and spending time with her family, which resides in Brawley.

We as Beyond Borders Team, couldn’t be happier for her and wish Dr. Garcia success in her new role as Superintendent/President of Imperial Valley College.