Douglas Nicholls was re-elected as City of Yuma Mayor 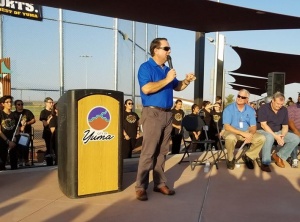 Per Yuma City Charter, Article IV, Section 5, any candidate receiving votes constituting a majority of all ballots cast in the primary is elected to office. Mayor Nicholls and Presiding Judge Coil are re-elected to their seats.

Candidates for City Council will move to the general election in November at a rate of two candidates per seat; thus two will be eliminated when the final tally comes in.

Votes will become final and official once canvassed by the Yuma City Council.