Donald Trump Accepts the Nomination for President of the United States 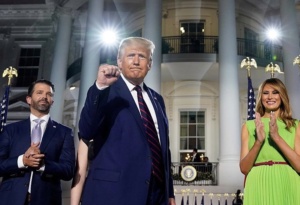 President Donald Trump formally accepted the Republican presidential nomination on Thursday night, breaking norms by doing so from a packed White House lawn during a pandemic.

Trump unleashed against Joe Biden and called him an instrument of the radical left and how could his election destabilize the Country. The president focused on his accomplishments on the economy and trade deals that will benefit the United States.

“In a new term as President, we will again build the greatest economy in history — quickly returning to full employment, soaring incomes, and record prosperity! We will defend America against all threats, and protect America against all dangers. We will lead America into new frontiers of ambition and discovery, and we will reach for new heights of national achievement. We will rekindle new faith in our values, new pride in our history, and a new spirit of unity that can only be realized through love for our country. Because we understand that America is not a land cloaked in darkness, America is the torch that enlightens the entire world,” Trump said in his remarks.

Trump spoke about past presidents who have led the nation in times of crisis and have taken the nation to times of great prosperity.

“And yet, despite all of our greatness as a nation, everything we have achieved is now endangered. This is the most important election in the history of our country. At no time before have voters faced a clearer choice between two parties, two visions, two philosophies, or two agendas,” Trump said, “This election will decide whether we save the American Dream, or whether we allow a socialist agenda to demolish our cherished destiny.”

Trump said the political establishment never expected and could never forgive him for breaking the cardinal rule of Washington Politics of keeping his promise.

“Together, we have ended the rule of the failed political class — and they are desperate to get their power back by any means necessary. They are angry at me because instead of putting THEM FIRST, I put AMERICA FIRST!” he said.

He criticized Joe for his failed policies for the last 47 years like supporting NAFTA and China that have taken jobs away from the U.S.

“We will also provide tax credits to bring jobs out of China back to America — and we will impose tariffs on any company that leaves America to produce jobs overseas. We’ll make sure our companies and jobs stay in our country, as I’ve already been doing. Joe Biden’s agenda is Made in China. My agenda is made in the USA,” Trump said.

Trump said Biden opposed School Choice and will close down Charter Schools, ripping away the ladder of opportunity for Black and Hispanic children.

“In the second term, I will expand charter schools and provide school choice to every family in America. And we will always treat our teachers with the tremendous respect they deserve,” Trump said.

“Democrat politicians refuse to protect innocent life, and then they lecture us about morality and saving America’s soul? Tonight, we proudly declare that all children, born and unborn, have a GOD-GIVEN RIGHT TO LIFE,” Trump said.

The president finalized by saying that the best for the nation is yet to come. Trump said the United States is not a nation of timid spirits. They are a nation of fierce, proud, and independent American Patriots.

“Americans have steel in their spines, grit in their souls, and fire in their hearts. There is no one like us on earth. I want every child in America to know that you are part of the most exciting and incredible adventure in human history. No matter where your family comes from, no matter your background, in America, ANYONE CAN RISE. With hard work, devotion, and drive, you can reach any goal and achieve every ambition.”