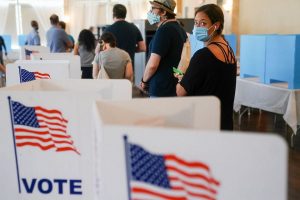 The goal in every democracy is to have a diversity of candidates that can truly represent their constituents the right way.

The 2020 election in Imperial Valley is the most diverse one in recent memory. It has the largest number of women running for office, millennial and Generation Z candidates, members of the LGBTQ community, and the incumbents that are defending their record of accomplishments seeking another term.

This election will certainly change the way politics will be done as there have been more organized efforts to educate the voters about the candidates and local measures. Local organizations and young activists have used the power of social media to bring forward the issues that affect their community and are also working for equality and social justice.

A hybrid of social activism, election education, and new voter outreach strategies that are taking place in 2020 will set the standards for future elections in Imperial County.

Valle Vota is a nonpartisan organization providing voter information to the community. They are a youth-driven organization and strive to provide fair and accurate information regarding registration, voting options, local candidates, propositions, and important deadlines.

“The reason we started Valle Vota is to tackle a very prominent issue that our valley has faced for many years and that is the extremely low voter turnout rate that we have here in our county,” said Yomar Aguilar, member of Valle Vota. According to Aguilar, in 2018, Imperial Valley was the only county in California to have less than 50 percent of voter turnout.

To tackle this issue, Valle Vota did a lot of canvassing and reached out to around 3,000 homes leaving detailed information about how to register to vote. They have also profiled all the candidates and uploaded their information on their social media platforms.

The Imperial Valley Equity and Justice Coalition advocates for community empowerment, social and environmental justice, and health equity. The group is made of young professionals and working to bring social change.

“Up and down the ballot, voters have the opportunity to issue a referendum on how elected officials have responded to the most severe public health crisis and the largest racial justice demonstrations in the county’s history. I vote in Calexico and we have the opportunity to transform local leadership with 4 out of 5 seats open. I’m energized to bring much needed new leadership to my city council. At the state level I’m fired up about rent control, restoring voting rights for persons on parole, protecting the worker rights of App bases drivers, and allowing diversity as a factor on public employment and education decisions,” said Luis Flores, an organizer for the IV Equity and Justice Coalition.

Other residents like Ernie Mariscal, a motivational speaker and business owner from Imperial Valley, sees this as a job interview to evaluate the credentials of each candidate because they work for the people.

“If they’re an incumbent, I look at the statistics; have they improved anything while being on that seat? But if we hold these people accountable when they come up for re-election and things don’t improve, it’s time to get out of there. If they are a candidate I look for three things: what are they bringing to the table, I look at their resume and accomplishments because if they have been doing things for the community already, I like that. If they say they will do things for the community when they get in, it tells me one thing: they are going after a title and not to help help the community,” Mariscal said.

For others, being engaged in this election is more than voting yes or no on the proposition, but what kind of country the people will inherit.

Actor Arturo Encinas sees this election season as an opportunity to see what kind of character will the U.S. have moving forward. He is engaged in this election by staying away from biased news sources.

“We are not asking where is our moral compass. Why are we so divided? Why is there so much hate? Those are the real questions we should be asking,” Encinas said.

Another issue important for Encinas is immigration reform and a path for citizenship for millions of people and addresses the issue of children that have been separated from their parents and are locked in cages.

“Whether you are Republican or Democrat, we need to find a solution,” he said. “On the local elections, you need to ask your candidates the tough questions. Because you don’t want to wait four more years for them not to do anything.”

Jose Alejos, the host of the Que Pasa Calexico Podcast, has talked to candidates running from the Imperial Valley. He believes voters want candidates to deal with safety, have transparency in government, keep their water rates low, and a leader that helps their community.

“They want a leader who is strong, serious, and are running to help. That stands up for them and their rights and make sure they are treated equal,” Alejos said.