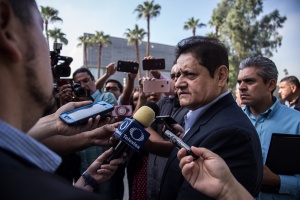 MEXICALI, BC.- In compliance with the agreements signed by authorities of the State Executive, headed by the State Governor, Francisco Vega de Lamadrid, today the payment dispersion of the benefit called “Differential Retirement” to federal retirees began.

The foregoing was reported by the Secretary of Education and Social Welfare, Miguel Ángel Mendoza González, by pointing out that this will benefit, every month, 6,857 beneficiaries, representing an amount of 27 million 968 thousand 339 pesos.

Mendoza González acknowledged the management of Governor Francisco Vega to obtain the necessary recourse, thereby covering the payment of the benefit for federal retirees.

“With these payments, the State Government wants to manifest the commitment to fully comply with the agreements with trade union representatives,” he said.

On the other hand, the Secretary of Planning and Finance of the State, Bladimiro Hernández Díaz commented that this payment is made with own state resources, derived from the savings by the measures of Containment of the Expenditure that have been running since the beginning of the administration, in 2014, with the Austerity Plan of the State Government.

He said that on the instructions of the Governor of the State efforts will continue to have balanced budgets and permanent reengineering programs to compact spending, this as one of the main qualities that have stood out during his government.

Finally, this state administration will continue to communicate with the federal agencies in the process of regularizing the delivery of Extraordinary Educational Supports previously agreed upon, which are intended for the payment of retired teachers.