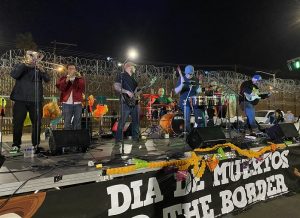 The border fence on First Street in Calexico was the perfect backdrop for a new event that celebrates Calexico’s unique culture and brings the community together.

Thanks to the initiative of two young Calexico entrepreneurs from “Roots Creative” and “Dawgs Hotdogs,” the Dia de Muertos event was the first event of many more to come.

“Dia de Muertos is a day where you commemorate the dead and we played around with that idea,” said Eddie Lopez who organized the event. “That’s the same thing that is happening with Calexico, Calexico is dying and the events were not happening and we wanted to bring the community’s spirit here in Calexico.”

Dawgs Hot Dogs is owned by Ivan Rodriguez and are also a local business committed to the community and is helping the city move forward.

The event saw musical performances by Santa Calecia, La Sucursal De La Cumbia, and Metalachi who made its big return to Calexico after many years. Metalachi is the world’s first and only metal mariachi band. The group’s act is about costumes, humor and performance in their music by taking famous songs from Gun N Roses, Metallica, Kiss, Twister Sister into their unique style of comedy and music that people enjoy.

Dia de Muertos at The Border celebrates the unity of life and death, considered by many to be the most important holiday of the year in Mexico and other Latin American countries. It’s a very special time, when once a year, the spirits of loved ones who have died return to earth to celebrate this holiday with friends and family.

A blend of Mesoamerican ritual, European religion, and Spanish culture, the holiday is celebrated each year from October 31-November 2. While October 31 is Halloween, November 2 is All Souls Day or the Day of the Dead. Legend says the gates of heaven are opened at midnight on October 31 and the spirits of children can rejoin their families for 24 hours. The spirits of adults can do the same on November 2.