Despite the Coronavirus Crisis, Remittances Shipments to Mexico Increase in 2020

During 2020, poverty in Mexico will increase due to the coronavirus health crisis, despite the shipment of remittances by Mexican countrymen.

The Bank of Mexico (Banxico) reported that the total remittances sent to Mexico during the month of May were 3,379 million dollars despite the outbreaks of Covid-19 (coronavirus) among all the states in the United States.

In March 2020, remittances reached $4,116 million, compared to $2,957.9 million last year, a level not seen for a single month; this amount represented a growth of 49%, the highest monthly increase since remittances have been registered from 1995.

The average remittance was $378, up from the $321 registered in February, while the number of operations out of sending remittances registered a monthly increase of 26.5%.

With this, in the first three months of 2020, remittances totaled 9,293.2 million dollars, the highest figure for the same period, and a record high.

“Mexican countrymen continue to send remittances despite the employment conditions of Mexican migrants in the United States who were impacted by the suspension of social and economic activities, due to the pandemic for coronavirus (COVID-19),” explained Dr. Alejandro Díaz-Bautista, an international economist, as well as a research professor at El Colegio de la Frontera Norte (El Colef).

The remittance figures came as a surprise because, since mid-March 2020, Americans have submitted more than 30 million applications for unemployment benefits. 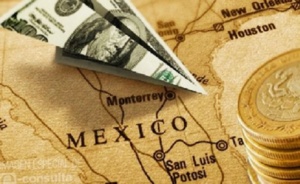 Among dollar flows, remittances have increased in recent years and are considered the main source of foreign currency for Mexico, above oil and exports.

Mexico is estimated to be the fourth country in the world with the highest reception of remittances behind India, China, and the Philippines. So the vulnerability and dependence towards the United States are extremely high and even more so in times of a global pandemic and economic and health crisis during 2020.

In Mexico, Mexican migrants have been described as living heroes because thanks to those remittances that they send to their relatives and loved ones, they help fight poverty in the poorest regions and states in Mexico.

Finally, during the first five months of 2020, the total of remittances sent to Mexico has exceeded 15 billion dollars, a very high figure.