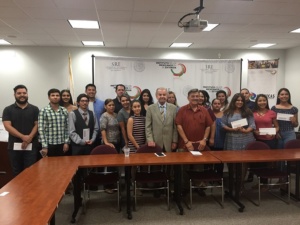 During the 2016-2017 school year, the IME-Scholarship Program awarded a $10,000 grant to the Imperial Valley College Foundation. With these funds, 20 selected students with a GPA greater than 3.0 were benefited.

For 6 consecutive years the Mexican Government have worked with the Imperial Valley College Foundation to benefit more than 150 students of Mexican origin to continue their education in the United States.

The IME-BECAS program was created in 2005 at the initiative of the Government of Mexico to contribute to the educational development and improvement of Mexican migrants living in the United States of America.

The program supports students to continue their academic education.

Since its creation in 2005, more than 56,000 students have benefited from the IME Scholarship program in the United States.