According to the International Organization of Migration, an estimated of 1.1 million undocumented minors resided in the U.S., undocumented youth make up sixteen percent of the undocumented population. In an action to protect these minors on June 15, 2012, the Secretary of Homeland Security created a program where certain people who came to the United States as children and meet several guidelines may request consideration of deferred action for a period of two years, subject to renewal. Deferred action is a use of prosecutorial discretion to defer removal action against an individual for a certain period of time. Is important to know that deferred action does not provide lawful status, nevertheless, the minors are eligible for work authorization. 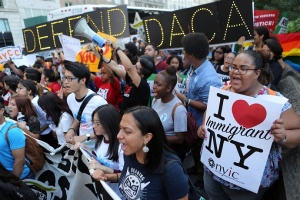 DACA was an unprecedented and humble program that allow vulnerable young undocumented immigrants the opportunity to feel part of the American Dream and live in the United States with no fear of deportation nor hiding.

However, since September 5, 2017, the current administration in the United States has renounce DACA leaving around 800,000 children’s in a vulnerable position, they no longer will be able to receive the protection of these program. The government is no longer accepting initial requests for DACA, but they will adjudicate initial requests for DACA accepted by September 5, 2017. As September 5, 2017, the government is no longer approving advance parole requests associated with DACA. And the adjudications for DACA renewal requests must be received by Oct. 5, 2017, and they must be from current beneficiaries whose benefits will expire between Sept. 5, 2017 and March 5, 2018.