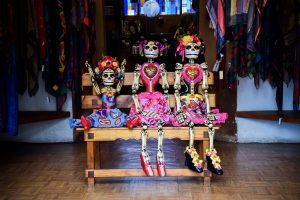 As Day of the Dead approaches, many organizations on both sides of the border are stepping into providing an alternative way to celebrate in the midst of the COVID-19 health crisis a holiday when relatives and friends would normally gather in close quarters.

Despite the coronavirus pandemic, Halloween still is a go in 2020 — with haunted houses, hayrides, corn mazes, trunk-or-treats, pumpkin patches and Day of the Dead festivities, with in-person and virtual activities throughout the Binational Mega-Region.

I’m sure all of you have watched “Coco” movie and already have an idea of what the “Day is the Dead is about and it has some similarities to Halloween, but while Halloween is celebrated on October 31st, Day of the Dead festival, shares similar practices, from decorating with pictures of skeletons to ghoulishly shaped sweets, like the famous pan de Muertos (bread of the dead) or the sugar Calaveras (skulls). But el Día de Muertos, which may be one of Mexico’s best-known holidays, consists also of a blending of European traditions brought by the invading Spanish conquistadores and the indigenous traditions of the peoples of Mesoamerica.

The Aztec Festival of the Dead was originally a two-month celebration during which the fall harvest was celebrated, and figures of “death” were personified as well as honored. The festival was presided over by Mictecacíhuatl, Goddess of the Dead, and the Underworld, also known to the Aztecs as Mictlán. In the pre-Columbian belief system, Mictlán was not dark or macabre, but rather a peaceful realm where souls rested until the days of visiting the living, or Los Días de Los Muertos, arrived. Over the course of the festivities, participants place offerings for the dead in front of homemade altars, including special foods, traditional flowers, candles, photographs, and other offerings.

Pre-Hispanic cultures believed that during these days of the year the souls of the departed would return to the realm of the living, where they could visit their loved ones. With the arrival of the Spanish and Christianity, the new rulers of Mexico attempted to marshal the celebrations dedicated to the dead under the auspices of All Saints Day (November 1st), and All Souls Day (November 2nd). The dates of these two Catholic holidays are now celebrated in Mexico as Los Dias de Los Muertos.

November 1st is a day to remember the children who died before experiencing the joys and sorrows of adulthood. Church bells toll in towns across Mexico early in the morning, to call on the souls of deceased children, or angelitos (little angels), to visit their living loved ones early in the day. In the evening of November 2nd, the more involved celebration begins, to welcome the visit of deceased adults.

The celebration includes an invitation for the dead to return to their family home for a visit. Families welcome them back by placing photographs of their deceased loved ones on altars and may even write and dedicate poems to them. The celebration includes offerings of cempasuchil flowers, drinks, and food for the deceased placed alongside their photographs and poems. Another traditional practice is the making of the bread of the dead and the sugar, colorful calaveras (skulls), decorated and labeled with names of people (living or dead).

Extended families will often gather in cemeteries on the eve of November 2nd, el Día de Los Muertos, and congregate at the gravesite of a deceased loved one to hold a commemorative feast. The family may keep a night-long vigil by eating the foods they have made in preparation for the celebration, visiting with each other, and praying for all the members of the extended family, both living and dead.

While some annual activities were canceled, sweet and spooky events still abound to help you celebrate, whether it’s a virtual activity offered by the Mexican Consulate, The Secretary of Culture of Baja California, Community organizations, the cities, or the Municipal Offices of Culture, I’m sure there’s plenty of events you can search online through official website or social media, they will be very entertaining, especially during this times of pandemic.