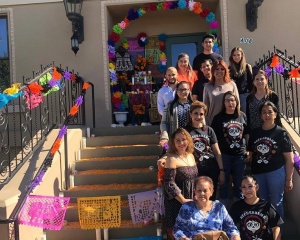 Right after Halloween, the people in Mexico celebrated Día de Los Muertos, or Day of the Dead, honoring those who have passed on with parades, gifts, and parties, as you’ve probably seen in Coco, the movie. This festivity was celebrated around Mexico and some places in the U.S. too, especially through the Mexican Consulates in the U.S. like the one in Calexico who decided to decorate an altar in honor of Rodrigo Sanchez Celis, who worked for the consulate and was well known as a friendly and altruist person, always involved in the community, he died young less than a year ago and on this holiday was remembered.

Some of the events celebrated this year’s Day of the Dead was  the Mexico City’s parade, where over 2 million people turned out to watch skeletons whirl through the streets in a vibrant display of life honoring death.

For the first time this year, the 2018 Day of the Dead in Mexico City Parade featured monumental skulls, parade floats and catrinas that toured Paseo de la Reforma, from the Digital Culture Center to the Zócalo, with the idea of parading great puppets based on José Guadalupe Posada’s work, parade floats, dancers, alebrijes and mobile offerings.

With more than a kilometer in length, the parade also evoked the historical stages of Mexico from the pre-Hispanic era to the present, through the Colonial period, the independent and revolutionary Mexico, and other important chapters of the national history. 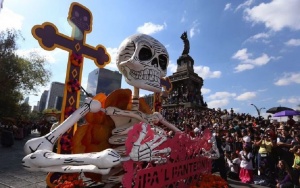 Day of the Dead is very popular among Mexicans worldwide. Mexicans believe that death is just a rite of passage, and the Day of the Dead, el ‘Dia de los Muertos,’ is a 4,000 year-old tradition celebrated in Mexico on November 1st and 2nd each year.

Mexican people build small altars in their homes with fruit, food, flowers, and small articles that belonged to their loved ones in the belief that they will come from the afterlife to visit them. Sugar skulls are decorated and sold in the markets — and traditional towns, such as Aguascalientes, hold a ‘desfile,’ or Day of the Dead procession, attended by over 75,000 people that incorporates music, dancing, allegoric cars, and people dressed as ‘Catrinas.

The days of the dead are truly a celebration of life.  When children dance with caricatures of death, eat skull sugar molds and learn to respect that life is brief, they learn there is a circle to life and to not fear death and then are free to enjoy and appreciate every moment.

Some Christian’s hold to the belief structure that every day should be treated like Christmas, – as every day Christ’s love is born and should be celebrated.  Therefore, the positive, compassionate attitude that is associated with the Christmas season would ideally be maintained throughout the year. Christmas Day is celebrated formally to remind us of this value.  The day of the Dead is similar.  During the days of the Dead, some believe that the souls of the departed return to earth to visit with and to provide council or give advice to family and loved ones.  There is a belief that this is true every day, but that November 2nd is the day set aside to remember and honor those who have past

In Mexico, there is a tradition of visiting gravesites.  Unlike the United States where graveyards are privately owned and maintained, graveyards in Mexico are often publicly owned or managed by local churches.  It is up to the families of the deceased and other community members to maintain the graves.

During the days of the dead, the family often takes the opportunity to visit the gravesite and pull weeds, clean any debris and decorate the graves of loved ones.  Often candles, flowers and the favorite foods of the deceased are placed on the grave and the family visits, eats, sings and tells favorite stories about those who have passed.

In the United States the tradition has been adapted.  Many set up altars in their homes and often communities host a variety of events. Altars are usually decorated with flowers, candles, pan de muerto, ceramic skulls, and most importantly pictures of loved ones.

Food placed on the altar consists of the loved ones favorite dishes and treats.  Drinks should be placed in the altar to quench the thirst of the dead after their long journey back home.  In many villages, it is customary to offer alcoholic beverages.  Salt is considered the spice of life and is one the staples that are often left at the altar.  The scents of marigolds, as well as burning copal (a resin of the copal tree), are thought to be most beloved by the spirits of the dead and invite them back home.

The rituals used to celebrate the day are varied and colorful.  Yet, all carry the same message, celebrating the day of the dead is a true celebration of life.