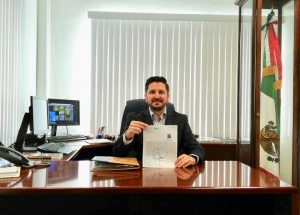 Ensenada B.C.- On January 16 of this year, David Pérez Tejada Padilla assumed the position of Administrator of the Maritime Customs Office of Ensenada, also covering the district of Playas de Rosarito.

Appointed by (MPA) Ricardo Peralta Saucedo, General Administrator of Customs, Pérez Tejada commented that it is an honor to have been taken into account for this assignment and that his work and experience within the Tax Administration Service has been recognized. Pérez Tejada Padilla, worked in the central offices of Federal Tax Audit since October 2017 in Mexico City and the position of Sub-Administrator of Control of Procedures and Legal Matters of the Border Customs Office of San Luis Rio Colorado, Sonora.

¨In the customs we must be facilitators of the clearance of goods to continue increasing investments, and attracting foreign trade to Mexico, also guaranteeing in this function the correct import and export of products, it is important to supervise the customs processes to facilitate the chains productive, competitiveness and increase the economic impact in the region, “said David Pérez Tejada.

Within his academic background, he has obtained a degree in International Business from the Center for Technical and Higher Education (CETYS University) and the San Diego State University (SDSU) with honors and academic merit, in addition to having a Master’s Degree in Public Administration with specialty in Cross-Border Governance by the Autonomous University of Baja California (UABC).

Pérez Tejada was elected Congressman for the state of Baja California in the LXII Legislature, served as Director of International Relations of the City of Mexicali and held positions in the then parastatal company of the Mexican government Ocean Garden Products, Inc.

He thanked the current administration for the opportunity to head such a high delegation being Ensenada a Pacific port for the clearance of merchandise, adding that he will work as a team with employees and users to achieve the goals of the institution.