Breaking News
Home / POLITICS / D.M.P.S. TOGETHER WITH OTHER INSTITUTIONS MEET TO CONFORM THE INSTALLATION OF THE FOLLOW-UP AND EVALUATION COMMITTEE OF PROXIMITY POLICE MODEL

D.M.P.S. TOGETHER WITH OTHER INSTITUTIONS MEET TO CONFORM THE INSTALLATION OF THE FOLLOW-UP AND EVALUATION COMMITTEE OF PROXIMITY POLICE MODEL 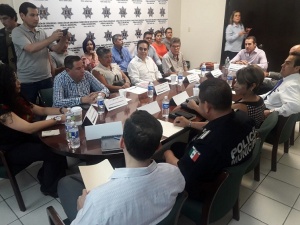 Mexicali, Baja California.- The Municipal Direction of Public Safety meets with the Public Safety Citizen Committee, the Xochicalco University, Community Leaders and with other Institutions, to formally set up the Committee for Monitoring and Evaluation of the Citizen Proximity Model.

In the meeting, members who form the committee took oath, whose function is to evaluate the work done by the citizen proximity unit with the population, following a national model where regulations and protocols are evaluated which involve citizen complaints to generate the ideal profile of the police that will integrate the unit, as well as its training. On the other hand, the proximity unit will work in conjunction with other institutions such as the Attorney General of the State, the Secretary of Public Safety of the State and the Citizen Committee of Public Safety that is composed of all citizens committees, in order to grant a better service to the community regarding public safety.

The local police will have the ability to approach the communities to receive direct citizen complaints and to manage such requests to the corresponding institutions, this in order to help the population to create a more secure environment and to generate trust and credibility in authorities. The goal of the Municipal Police is to create 550 citizen committees and thus cover 100 percent of the city’s neighborhoods, there are currently more than 400 committees formed. This was reported by the Director of Municipal Public Safety, Attorney Alonso Ulises Méndez Manuell-Gómez.