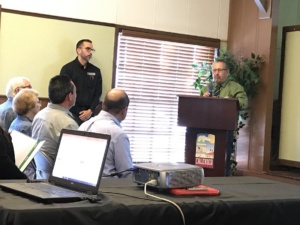 As projects that are intended to improve the New River in Calexico, it’s progress remains to gain momentum thanks to the collaboration of municipal, county, and state agencies.

A public meeting was held at the Calexico Women’s Improvement Club on July 11 to hear an update on mitigation projects going on at the river.

The road -a difficult and a complex one-  started more than a decade ago thanks to the outcry of the neighbors impacted by the New River and the initial public officials who heard the demand and got the ball rolling at a state level. The impact in the quality of life of the residents living near the New River was affected as well as their health prompted them to demand their elected officials to act. For many residents, it seemed like a lost cause or believed that there will be solution ever but things started to take a turn when government agencies and environmental justice groups came together.

The New River Improvement Project was created by Assembly Bill 1079, in 2009 by former Assemblyman Manuel Perez. AB 1079 also required the California-Mexico Border Relations Council to develop a strategic plan to guide its implementation.

The New River is one of the most polluted rivers in the nation. Trash and waste from municipal, agricultural, and industrial sources cause heavy pollution throughout the New River, which runs from Mexico through the city of Calexico to the Salton Sea. It poses serious threats to public health and hinders local economic development.

The present-day channel of the river was created in 1905-1907 when the Colorado River washed out diversionary works, and the entire Colorado River flows cursed into the Salton Sea basin creating the New and Alamo River channels, and the present Salton Sea, Thus the name “New River.”

The New River Improvement Project also envisions a pedestrian and bicycle parkway that would run along the river in the Calexico area and supports the Calexico New River Parkway development. Calexico Assistant City Manager Miguel Figueroa said the construction of the parkway will finalize in 2020.

“Part of the reason residents living near the New River joined the New River Strategic Plan was because they made it clear that they wanted to replace the contaminated land with a green area park with amenities their families and children could use,” Figueroa said.