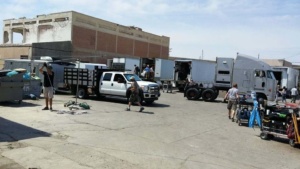 The film industry has been affected by COVID-19 halting production that would bring revenue to cities and counties.

The State of California has released guidelines to begin filming again with restrictions to prevent the spread of the virus. The Imperial County has yet to see the reactivation of filming according to Charla Teeters, Executive Director of Imperial County Film Commission.

Teeters made a presentation at that Imperial County Board of Supervisors at their June 23rd meeting and gave an update on the status of film production in the Imperial County. Teeters said that before the pandemic lockdown, there were many productions ready to begin filming such as TNT’s the Animal Kingdom, a car commercial, a production from the United Kingdom, and a feature film.

“Those productions were going to bring thousands of dollars in economic impact for the Imperial County,” Teeters said.

Teeters added that the fiscal year 2019-2020 was a slower year compared to other years. Due to COVID-19 and the economic crisis it brought, the staff at the Imperial County Film Commission is currently laid off but continues to be in contact with other film commissions in California to see where the industry is at the moment.

“Most likely in-studio production will come back since it’s a controlled setting and later on on-site filming will return afterward,” she said.

The Imperial County Film Commission is recognized by the California Film Commission as the official advocate for filming interests in our region. ICFC is also a member of the FLICS (Film Liaisons In California, Statewide.) A FLICS designation recognizes the staff of the ICFC for their knowledge of all issues that affect production in their area. The FLICS certification serves as a “Seal of Approval” to the film industry and assures film companies that a FLICS location representative understands the film business and will be able to capably assist their company’s on-location efforts.

The ICFC was founded to facilitate business with incoming motion media companies and provide insight into the community’s resources, including human power, infrastructure, and economic development. With local assistance and expertise, ICFC also acts as a gateway to efficient production and permitting processes, as well as a guide to services, talent, and locations available in the community.