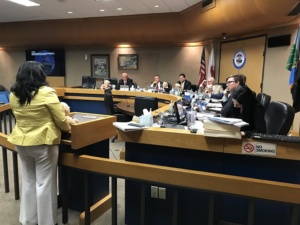 The Imperial County Board of Supervisors supports a bill that will make the month of January as Youth Development and Engagement month.

On January 6, 2013, Martin Alberto Garza, a 17-year old resident of Brawley was fatally stabbed outside of a party in El Centro. From this act of gang violence, arose a passionate family determined to make their son’s life and death meaningful and a cause to prevent another young life from being cut short by gang violence. Soon after, Martin’s parents and family established the Mothers-Men Against Gang Coalition (MAG) whose mission is to promote positive activities to deter youth from joining gangs.

Martin’s mother, Yulil Alonzo Garza, told the Board of Supervisors that it is important to commemorate this month so there can be more helpful for the youth that need it the most. She said the goal of creating the MAG Coalition was to prevent another family from suffering the pain the Garza family goes through each day.

“If we invest a month of January we can help a lot of youth that are in need of help,” Garza said, “We are starting Youth Development an Engagement Month in California but this needs to be nationwide,”

“Youth who are constructively involved in learning and who are connected to positive adults and peers are less likely to engage in risky or self-defeating behaviors,” Supervisor Luis Plancarte said in a letter addressed to Assemblyman Garcia. “Through youth engagement, communities can foster an environment that helps young people develop in healthy ways. All youth in California deserve an opportunity to build their dreams and claim their destiny,”

Gang-related violence is a problem throughout the state. Despite the steady growth in the number and size of gangs and the criminal behavior and violence they spawn, there is still the issue of youth being drawn to gangs. A heightened level of gang prevention awareness is required in order to combat this issue, thus it is important for the county to encourage a focus on youth development and engagement throughout the state through this annual proclamation.