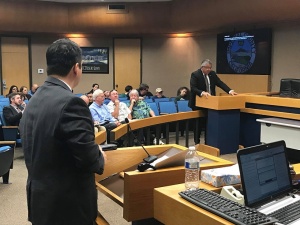 After months of back and forth negotiations between Imperial County and the District Attorney’s Office, the Imperial County Board of Supervisors approved a series of actions related to the reorganization of the office at the April 16 meeting.

The county and the District Attorney’s office has been in opposite sides for the last few months regarding contract negotiations and the plea from the D.A.’s office to help solve the retention issues they have. It even escalated into a strike by the attorneys that lasted two weeks in order to get the attention of the board and seek a solution.

“I believe this will slow down the exodus of attorneys since I believe this new position and salary can offset, although not by a lot, the cost of living differences between and the larger, higher paying counties,” Otero told the Board of Supervisors at their regular Tuesday meeting.

Otero said this would not impact the General Fund for Fiscal Year 2018-2019 and any impact will be minimal for next years’ budget would be covered by the appropriate funding sources to the department.

In addition, the new salary range for Senior Deputy District Attorney will allow the office to be more competitive in retaining the most senior and experienced prosecutors, Otero said.

The attorney positions in the office of the District Attorney have consistently been understaffed for many years. Otero said that the problem facing the office is recruitment and retention.

“Our low beginning salary does not allow us the ability to recruit qualified attorneys that can handle the extensive caseload experienced by our attorneys,” Otero told the board.

Otero added that at time times they are fortunate to hire someone who can handle the extensive caseload but it’s difficult to for them to retain attorneys since other higher paying counties also take notice of the quality attorney they train.

“The money offered to the attorneys, although many enjoy the work atmosphere and conditions this office provides, is too great to pass up,” Otero said.