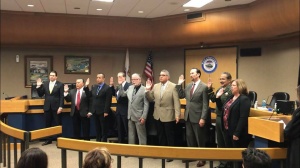 A new day in county leadership begins on January 7 as imperial county officials took oath of office lead my Judge Ruth Montenegro. The officials raised their right hand and promised to do their jobs at the best of their ability.

Each of them officially began their term Monday, January 7 and started working that same day. They will each work with the community and the county staff to improve the quality of life for Imperial Valley residents.