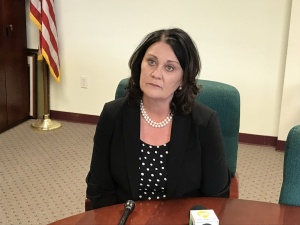 Fifteen Deputy District Attorneys’ did not show up to work Tuesday morning, something the County Board of Supervisors immediately reacted with concern.

During Imperial County Board of Supervisors Meeting, Chairman Ryan Kelley made a public statement regarding the sick out of fifteen attorneys saying the action has caused alarm and concern to the board.

“This action appears to be an unusual strike in violation of the Meyers-Milias-Brown Act. Specifically, the District Attorney’s Association appears to have made an unfair labor practice by failing to provide the county sick advance notice of an oncoming strike,” Chairman Kelley said.

Kelley added the county counsel’s office and Department of Child Support Services is providing Attorney coverage to the D.A.’s office. If the county finds that the attorneys used their sick leave against county policy, it will initiate disciplinary action.

“We have heard from them their retention and working condition problems. They want to be referred to as public safety and if really are public safety then they are jeopardizing all the residents of Imperial County by this action,” Kelley said.

Kelley said that if the attorneys are not back at the workplace Tuesday morning the county will take the appropriate action based on their absence.

In response to these comments, Deputy District Attorney Deborah Owen said they have lost several attorneys in 2018 due to accepting high paying jobs in other counties and retirement. Owen said they are down to 14 attorneys which increased the workload for each of them.

The District Attorneys Association and Owen have gone to the board stating that the county has a problem of recruiting and retaining qualified attorneys because of the low pay. Owen said that currently, the misdemeanor attorneys have handled 1,600 cases a year when the standard for them should be 400 a year. Owen said that when that happens the rights of victims and criminal defendants are compromised and public safety is impacted. Owen said that county felony attorneys handle between 240 to 300 cases when the criminal justice standard calls for attorneys to handle up 150 a year.

“Offering 2.2% to attorneys who make 20 to 60 thousand dollars less than their counterparts through California is not meaningful. What the county board of Supervisors is doing is pitting one group of county employees against the other. I don’t think it’s responsible leadership by them, I don’t believe it’s professional, and accusing the lawyers of compromising public safety is a misstatement of the facts, it is rhetoric to promote the agenda of the county Board of Supervisors,” Owen said.