County Board of Supervisors Wants Clarification on Port of Entry Changes 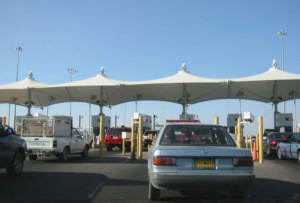 The Imperial County Board of Supervisors sent a letter to Customs and Border Protection asking for clarification on the changes made that is causing longer border waits.

In the afternoon of August 21, 2020, the U.S. Customs and Border Protection distributed a notice to inform stakeholders that they will limit resources during peak times for non-essential travel at the Ports of San Ysidro, Otay Mesa, and Calexico. Aside from that statement, there was no additional information that explained what specific changes would be made, including staffing or hours of operation, or how CBP defines peak times.

Following this announcement, the impacts were felt immediately at the Calexico West Port of Entry and members of the Board of Supervisors and County staff received calls and complaints regarding the exceedingly long wait times at the port of entry. Some sharing that they experienced wait times as long as seven hours. The County feels that longer border wait time, especially unexpected ones, adversely impacts the local economy.

The board sent a letter to Customs and Border Protection Director, Pete Flores, regarding the changes made at the Calexico port of entry.

In a letter signed by Chairman Luis Plancarte, he says that a large percentage of workers employed by agricultural companies located in the Imperial County live in Mexicali and cross the border every day who are essential workers. Plancarte said in the letter that in order to protect their employees from high temperatures experiencing during the summer months, farmers and ranchers often implement night and early morning production schedules limiting work activity when temperatures reach 95 degrees and above.

“Although border crossings delays are continually an issue for the agricultural industry, since August 22nd, in an unofficial survey, farmers reported an absentee rate of approximately 15% due to long waits on the border,” Plancarte stated in the letter. “Moreover, other local industries and organizations employ U.S. citizens who reside in Mexicali, many of which are considered essential workers. Long border wait times lead to tardiness or absenteeism, which lessens the effectiveness of that company or organization.”

The letter asked CBP to clarify what are the changes they are implementing so that residents can have more information. The Board of Supervisors is asking what is the definition of peak times for non-essential travel, how they define peak times, how was essential worker transportation activity considered when determining peak times for non-essential travel, and what are the current staffing levels at all three ports of entry in Imperial County and how does that compare to pre-COVID-19 staffing levels.

“Any changes or modifications made directly impacts our local economy, and it is imperative that the County of Imperial is informed with advance notice to prepare for the impacts or to be given the opportunity to provide input prior to the implementation of any changes so that the direct and indirect impacts are considered.”