County Board of Supervisors Extends Eviction Moratorium Until January 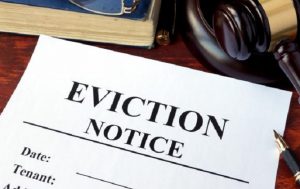 Renters in the unincorporated area who lost their jobs or are struggling with medical bills because of the COVID-19 pandemic are now shielded from being evicted from their homes until January 31, 2021.

The local ordinance offers protections to tenants in the unincorporated area of the County of Imperial by prohibiting the eviction of any tenant who can demonstrate that they have received a notice of eviction for failure to pay rent and that such failure is related to a substantial loss of income and because of medical expenses. The ordinance includes commercial and residential properties in the unincorporated areas.

The ordinance provides a grace period of 120 days following for tenants to pay any past-due rent. It prohibits landlords from charging late penalties against any amount of rent owned during the term of the ordinance.

While the ordinance provides protections against evictions, it does not relieve a tenant of the obligations to pay rent, nor does it restrict the landlord’s ability to recover rent due.

On March 4, 2020, Governor Newsom issued a proclamation related to the COVID-19 pandemic. The Governor issued an Executive Order which suspended any provision of state law prohibiting a local government from exercising its police power to impose substantive limitations on residential or commercial evictions. Following the issuance of this Executive Order, several cities and counties within the State issued moratoriums on COVID-19 pandemic related evictions.

In other agenda items, the board ratified a resolution in memory of Iran Martinez for 20 years of dedicated service to the County of Imperial and designated the “Iran Martinez Reporting Center” as the official name for the Housing Rehabilitation Program and Services for individuals and parole. Iran Martinez died last month due to cancer and was a respected member of the Imperial Valley community.

Iran Martinez started his career as a Deputy Probation Officer in 1999. Moving through the ranks with his skill and a strong commitment to public safety, in 2012, Iran was promoted to Probation Division Manager. With the public safety realignment having been initiated, Iran was tasked with opening the county’s first Day Reporting Center as the centerpiece of evidence-based practices and the re-purposing of probation to better serve those individuals returning to their communities following incarceration.

“Today, the center stands as a testament to both the hard work and pursuit of excellence in programming that Iran’s leadership provided,” said Chief Probation Officer, Dan Prince. “Iran was instrumental in setting up the center and bringing many partner agencies together to help improve the lives of countless justice-involved individuals. The Imperial County Probation Department will be forever grateful for his energy, his commitment to helping others, and the big footprint he left behind.”