County Board Declares State of Emergency at Salton Sea 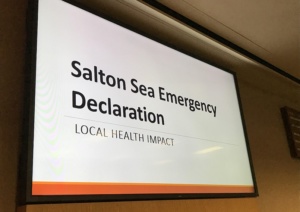 Given the lack of action by the State towards the restoration of the Salton Sea, the county declared a state of emergency in the area at the Oct. 22nd meeting.

The board met at the County Administration Building in El Centro to discuss an item that was requested by Chairman Ryan Kelley. The county and the Air Pollution Control District are aware of the harmful dust and air pollution at the Salton Sea that is harming Imperial County residents with respiratory diseases and high asthma cases for residents.

Due to the termination of water mitigation on January 1, 2018, the shoreline is being exposed at a rapid rate. This results in the harmful particular matter being emitted into the air in the vicinity of the Salton Sea. The County Office of Emergency Services Director agrees that this is a peril for human life and is a crisis beyond the control of the County of Imperial.

“We have been fighting this ridiculous battle for more than ten years having all these meetings and we still don’t see a solution,” Supervisor Michael Kelley said. “Like I told Governor Brown, if the Salton Sea was in the Sacramento area, this would have been solved immediately,”

Imperial County Air Pollution Control Officer Matt Dessert told the board that they have sent letters to the State Water Resources Control Board telling them about the negative air quality impacts comings from the Salton Sea. It was stated in the letter that in 2018, the playa exposure increased by 8 percent while the emissions increased exponentially by 41 percent.

The APCD recommended that funds spent on the Salton Sea would be best allocated if the project footprint areas were beneficial to both air quality and habitat issues. However, Dessert said that there has been no response to the concerns expressed in the letters.

Dessert added that the APCD is concerned about the lack of surface roughening projects and now reminds the State that alternative measures need to be vetted and approved with APCD and State coordination. They also brought attention to the lack of progress of permitting, easement and right of ways. The Army Corps of Engineers was cited as a new obstacle to obtaining permits. Problem identified with Army Corps of Engineers are any and all discussion around the Salton Sea elevations, -231 ft.

Supervisor Jesus Escobar said that the county has been a team player but now they need to be more aggressive.

“We need to push the envelope and stop being nice,” Escobar said.

“There are people in the state that are making decisions from their offices. Here we have human health at risk. This will get worse as time goes by so we need to take action,” Chairman Kelley said.

The board voted unanimously to approve the state of emergency declaration.