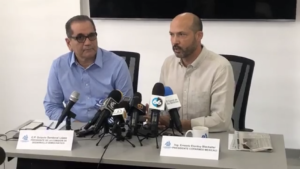 Coparmex Mexicali President, Ernesto Elorduy, offered a press conference, regarding the reasons why Coparmex Baja California demands to proceed through an appeal for Political Trial, to require the members of the XXIII Baja California Legislature, in relation to the decision taken on July 8, where they amended the law to extend the state’s governorship period, from 2 to 5 years.

He pointed out that it is intended that the president of the board of the State Assembly of Baja California, Catalino Zavala Marquez proceeds to publish the modification of article 8 of the constitutional transition, which establishes the extension of the period of the elected governor, in the Official State’s Gazette, so that in this way it can be challenged through the corresponding institutions.

He also stated that it is a shameful situation, which to date, it is unknown if the elected governor, Jaime Bonilla Valdez, will be in office for 2 or 5 years. In addition to that, it is an aggression to the rule of law, and legal certainty, since the trust of citizens, who went to the polls on June 2, was violated and who elected a governor for two years.

In the same way, he indicated that Bonilla’s work team is facing uncertainty regarding how they will put together their work plan, whether it will be for 5 years, or only two. Noting that people voted for a new government, in which there is a great expectation, especially with the promises of change in the ways in which political life is exercised.

Finally, he stressed that the call to file political trial is on a group of 30 citizens since Coparmex is not empowered as an organization, to carry out that process. Likewise, they will issue an appeal for a provision of law, before the state anti-corruption system, to review the process that was carried out to proceed with the reform at a wrong time.