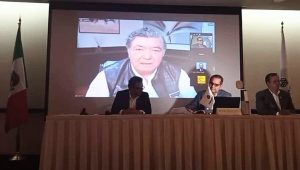 Among the commitments given to the candidate as well as those running for Congress, it asked for the promotion of the necessary reforms to have an autonomous anti-corruption system, the implementation of the anti-corruption state policy under the supervision of specialized organizations, and citizens in the matter.

Also, a legal framework necessary to implement an open government that does not interfere in the internal life of the state anti-corruption system, in addition, a mandatory session by the Governor with the Council for Citizen Participation at least every four months.

“Baja California will be a state that takes advantage of its resources and maximizes opportunities directly proportional to transparency and good management of them, otherwise we will continue to see the budget debacle and corruption,” added Francisco Fiorentini Cañedo.

On the other hand, three proposals for action related to public security were presented to him; the development of a strategic model for the social prevention of violence and crime focused on respect for the dignity of people and the strengthening of the family, development of a comprehensive strategy for the dignity and professionalization of police institutions. In addition, develop a comprehensive strategy to combat high-impact crimes.

Regarding the Transparency Commission, the open government proposals were presented, which proposes an adjustment at the regulatory level to break the monopoly in public works and public debt concessions; digital government, which allows the payment of rights and services from an app, as well as the automatic update of the list of beneficiaries of social support; and a government that is accountable in real-time, broadcasting live sessions of the procurement committees as well as the immediate publication of official documents.

The creation of a new law on citizen participation allows greater intervention and participation of the citizenry. Strengthening of the ecology and environment units; regarding education, they mentioned, modernize and make the educational system transparent, innovation in terms of new technologies, and active links with the community.

On his part, Rhon mentioned himself in favor of the proposals, he also clarified: “I have always conducted myself within the law, that is what I will do in government.”  In addition, he invited the electorate to come out to vote during the next elections.