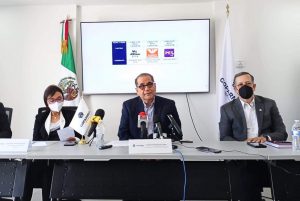 MEXICALI, B.C.- COPARMEX Mexicali introduced proposals to the media for the candidates for Baja California Governor, this in the absence of specific proposals from them, said Octavio Sandoval, president of the union.

“COPARMEX did some work to introduce these proposals to the candidates so they can sign it and implement it if they are elected,” said Sandoval.

The strategies they are promoting among the candidates were highlighted; transparency, accountability, and digital government commission, he explained, they seek to reinstate the figure of autonomous fiscal bodies, for example, the anti-corruption and electoral prosecutor’s office.

Regarding the proposals of the rule of law, mention was made of the appointment by opposition examinations of all the positions of the dispensers of justice, judges, and magistrates; a new law on citizen participation for the state, and a budget in the fiscal year to grant resources to the judiciary.

The president of COPARMEX Mexicali highlighted, regarding infrastructure and development, the need for investment in the installation of clean energy generating plants, a feasibility study for the Wind Farm in La Rumorosa, management as well as the implementation of public policies in the field of energy.

Regarding the environment, mention was made of the creation of a pollutant waste management program, as well as a verification and monitoring program for the control of pollution generated by vehicles.

The lack of investment in infrastructure in Baja California during the last 10 years was highlighted. Sandoval commented, for investment in infrastructure to be possible, it will be necessary to implement a program to clean up the state’s public finances, which includes the reduction or elimination of the budget deficit of 4 billion pesos per year by increasing income or taxes and the reduction of expenses.

On the other hand, a digital open government model was proposed to combat corruption, through which the live transmission of the signing of contracts and public works will be allowed on the internet, with documents signed 24 hours later being uploaded to the portal. It was announced that these proposals will be on the internet for public view.