Coparmex Mexicali invites the public to the conference “Building Mexico” 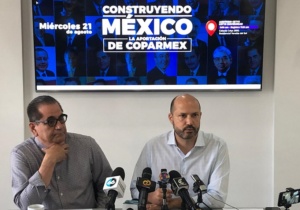 Coparmex Mexicali president Eng. Ernesto Elorduy Blackaller, and the president of the Commission for Democratic Development, Octavio Sandoval, presented the “Building Mexico: The contribution of Coparmex” event details, during the celebration of the 90th anniversary of the organization, which for almost a century has stood out for ensuring the rights and interests of entrepreneurs and citizens.

The event will be starring 13 speakers, including 7 former Coparmex National presidents, presented by the current president, Gustavo De Hoyos Walter. Each one will expose their perspective on different eras in which the Mexican economy went through certain transformations, and the role that Coparmex has developed, given the challenges that Mexico has to face.

For his part, Mr. Octavio Sandoval pointed out that the efforts made by Coparmex should be taken into account as a great support in favor of citizens, seeking to establish a social action independent of politics, which is more participatory and close to those who contribute to the economic and public development of Mexico.

Finally, Ernesto Elorduy mentioned that this event is a great opportunity to present and discuss opinions about the decisions that the current federal government is taking, and the actions they are taking, and we must take as citizens, in order to promote citizens’ participation, as an instrument to build a stronger democracy.

“Building Mexico by Coparmex,” will take place at the Vildósola Auditorium of CETYS Universidad Campus Mexicali, on Wednesday, August 21, at 8 in the morning. The recovery ticket cost will be 600 pesos.