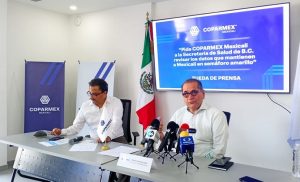 MEXICALI, BC- COPARMEX Mexicali gave a press conference in which they asked the State Secretary of Health to review the data that keeps the city in the yellow tier, by being the only city in the state, while the remaining cities are in the green.

The president of COPARMEX Mexicali, Octavio Sandoval López explained that there are two considerations when keeping the city in yellow. On one hand, he said, it could affect the opening of checkpoints to be held next week, and secondly, it negatively impacts economic activities particularly in the tourism sectors of restaurants, bars, and nightclubs.

Mexicali, being the only municipality in the country that has a vaccination status of about 70%, he explained, is not the case of other municipalities in the state and therefore does not coincide with the category. “We want to review what is happening in Mexicali that does not lower our tier and what measures we must implement,” Sandoval explained.

The director of COPARMEX Mexicali explained, “At the national level of the Ministry of Health, Baja California appears as a green traffic light, at the local level, it turns out, the five municipalities appear as green traffic lights and Mexicali does not.”  He added, they seek to be certain of the opening of checkpoints in a yellow traffic light condition or knowing the necessary measures that need to be implemented in the city to be able to change this situation.