“Coparmex in your state” heading a new national tax convention 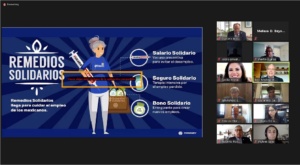 Mexicali, B.C.- In a virtual press conference, national and state representatives presented topics about reforms, proposals, and initiatives that have emerged mainly in recent months. It discussed a necessary National Tax Convention, “Solidarity Remedies”, the Gandalla Law, and complaints about alleged business debts to the CESPT (Water Commission Services in Baja California).

Thus, the improvement of control mechanisms was discussed; about the decentralization of resources and renewal of the distribution of shares between states and municipalities, which aims to reward entities that contribute the most to the federal tax collection, the most transparent in their finances, as well as the collection capacity.

These medium and long-term proposals for economic recovery were presented, focused on attracting investment to the private sector through an accelerated depreciation program and energy infrastructure projects, as well as the implementation of an Independent Fiscal Council.

Thus, the topic of Solidarity Remedies was also exposed, a scheme that emerged in response to the accentuated recession in the economy due to the current Covid-19 pandemic for the preservation of jobs. This raises participation between workers, government, and companies that will be governed under the three modalities: Solidarity Salary, Solidarity Insurance, and Solidarity Bonus.

The Solidarity Bonus is an incentive for hiring formal employment. On the other hand, in regard to the supposed debt of companies with the CESPT, it was commented that they are taking care of the issue with their lawyers respectively, to solve this problem that has affected the operation of some companies.