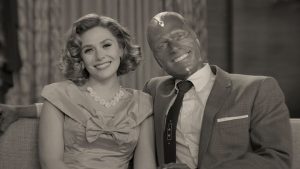 Content and distribution have become the way entertainment is being done right now as the series you watch are part of the demand of creating new material. The way we consume TV series and the effort by the studios to create high-quality stories is changing the game and we should enjoy how history is unfolding before our very eyes.

Just look at the latest streaming hit, Wandavison on Disney +.

Wandavision, the Marvel Cinematic Universe-based series, scored the largest audience of any title across all major video streaming platforms in January, according to data provided to Variety’s Intelligence Platform from connected-TV analytics provider TVision.

Per Variety’s report, WandaVision ranked as the most-watched show last month with an indexed audience-size figure of 8,127 (TVision determines viewing impressions by counting viewers who have watched a title for at least two minutes within a session of watching content for at least five minutes).

Meanwhile, Bridgerton — which has been renewed for a second season and became Netflix’s “biggest show ever” in the month following its Christmas Day premiere — came in second with a figure of 6,808 in January.

It was reported each episode of Wandavision cost $25 million. Marvel will be launching movie-quality tv-series moving forward. The next series will be Falcon and The Winter Soldier. In this series, Falcon becomes the new Captain America.

But the appetite for having new series is just part of the streaming world. You also need content and networks are spending millions of dollars to buy them.

The streaming service, Peacock, which is owned by NBC Universal will bring WWE content to their network supplying them with an extensive library of more than 30 years of professional wrestling. The deal would give WWE $1 Billion.

WWE Network was launched in February 2014 and was ahead of its time because it changed its business model from relying on pay-per-view events in favor of an OTT (streaming media) service. Over the past couple of years, WWE realized that trying to maintain the infrastructure could come at the expense of programming, bringing about the relationship with Peacock, which was a streaming service started last summer by NBCUniversal.

WWE Network averages 1.5 million subscribers and will see a huge jump in its potential audience. Comcast said in its fourth-quarter financial report that Peacock had 33 million sign-ups. It has been speculated that this deal will encourage NBC to buy WWE in three years. WWE will shut down the existing standalone WWE Network app on April 4, meaning WrestleMania will be exclusively on Peacock. Comcast said in a release that the entire WWE Network archive should be on Peacock by mid-August.

The value of content and distribution is there and just watching it work is just fascinating.