Craft beer is… hand-crafted. What does this mean? Let’s see.

Unlike “industrialized” or “corporatized” beer, craft beer is made with non-automated manual procedures. The artisan personally supervises each stage of the process, making sure that his recipe expresses what he has in mind. At the slightest neglect of the brewer, everything collapses. There is no computer that is monitoring, controlling, or correcting possible human errors.

In 1979, the then-US President Jimmy Carter, following in the footsteps of Great Britain and Australia, amended the constitution allowing any US citizen to brew beer at home.

Eventually, this becomes a movement that grows steadily, spreading their enthusiasm to many to the extent that they began to brew beer. “How difficult can it be – they thought – if even in my kitchen at home I can make a few liters”? Suddenly, 25 years after that constitutional amendment, anyone called himself a “brewer.”

Everything was going well until some of these enthusiasts decided to venture into the business world. In the United States, this grew quickly and in an orderly fashion thanks to the rigorous sanitary controls that the government requires and monitors. In Mexico the story is different. Let’s start by saying that this artisanal industry took the Mexican authorities throughout the country by surprise and they did not end up agreeing even on the law.

In some states, they have not even realized that this incipient activity exists. For this reason, sanitary controls – if there are any – are much laxer. A couple of examples: the first state to create a legal framework to support the production of craft beer was Baja California… with a delay of almost 15 years after it was already manufactured. Another example: COEPRIS (National Commission for the Protection Against Sanitary Risks) carried out just a few weeks ago the first study that assesses the sanitary quality of the almost 100 breweries that exist in the State. BEWARE … COEPRIS has not yet gotten around to assessing the public health condition of craft beer outlets, that’s another ticket.

There’s no control whatsoever by the microbrewer associations over their members (they don’t even distinguish between the formal and the informal ones) in terms of quality. All of them offer their products in different points of sale and this is a real shame since Baja California was for years the undisputed leader and an example to follow for beer artisans throughout our country. However, independent manufacturers in other states focused on steadily improving their production processes and now the story is very different. 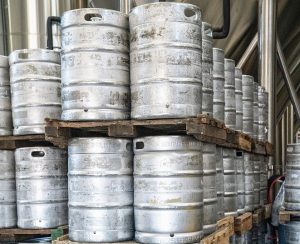 All this problem is reversible, of course, but the damage has already been done and it will take time and effort to repair it. In a conversation that I had months ago with Dr. Rafael Martinez, a doctor with a master’s degree in science with a focus on microbiology, he told us that, although there are several processes in which a beer can become contaminated during its production, they are perfectly detectable and correctable. The important thing is to be careful to constantly run tests that corroborate that there are no hostile bacteria or any type of pathogen in those particular processes. This requires external specialists who are systematically monitoring the existence of eventual contaminants in beer that can cause illness and possibly even death.

The future of the independent brewing industry is highly dependent on much stricter quality control at each brewery. Consumers are demanding more and better beers that guarantee the highest quality standards. Although during these years of explosive growth in the industry millions of curious drinkers came to know this type of beer, many have been disappointed by the lack of seriousness of some manufacturers who mistakenly believed that this market would remain forever.

The beer culture still does not permeate enough in our communities, there are years of good work for this to happen. It is time to give reasons to each enthusiastic consumer to make this concept their own and remain … but, being as we are, it will not be possible.