Fruits and vegetables are also favorites in the United States.  Cars produced in Mexico continue to be in demand and exported. According to estimates by Colef and the Migration Policy Institute, of a population of almost 57 million Latinos in the United States, more than 63 percent are of Mexican origin, which represents about 36 million people.

One of the products that millions of Mexicans living in the United States miss the most is gastronomic products. The Mexican agri-food sector is one of the most important in terms of exports and the United States is the country that consumes the most Mexican products, followed by China, Japan, and Canada.  Similarly, the secondary sector is important and hence the exports of Mexican value-added cars to North American partners.

Mexico is the fourth-largest producer of beer worldwide, but it is the one that exports the most.  It is estimated that 8 out of every 10 liters of beer exported go to the United States, the rest is divided between Canada, Chile, and Australia.  Mexico is the number one avocado producer in the world with 1.4 million tons a year, on average.

Tomato is an essential ingredient for hot dogs, hamburgers, pizzas, and pasta.  90% of the tomato consumed in the United States is Mexican.  Avocado also shares this percentage, and is the main raw material for guacamole, being the most consumed dip during the Super Bowl.

Mexico has three products that were the most demanded by United States citizens from January to November 2021, according to data from the Ministry of Agriculture and Rural Development. Currently, tequila, beer, and avocado are the three most exported Mexican products to the US market. The advantages of the increases in the export of products for Mexico are the generation of employment and foreign exchange, the strengthening of the competitiveness of the products in quality and price, and the country’s access to new markets.

The analysis of tequila sales in the US market indicates that they were 3.35 billion dollars in the period January to November 2021, an increase of 41% compared to the 2.37 billion dollars in the January-November period of 2020, while in volume there is an increase of 15%, with data from the Department of Commerce and the United States Census Bureau.

The total value of Mexican agri-food exports to the United States amounted to 35 thousand 275 million dollars, which represents an increase of 15% compared to the same period of the previous year. Alcoholic beverages and vinegar registered an accelerated increase of 25%, both in value and volume, and have consolidated as the most important in value, above the fruit and vegetable segments.

Frozen fruit exports also continue to rise, including frozen raspberries (94% in value and 36% in volume), frozen strawberries (25% in value and 18% in volume), and other frozen fruits (14% in value and 9 % by volume). Vegetable export volume growth accelerated to 8%.  Among the vegetables that registered the most significant increases are onion (26%), lettuce (20%), pepper (15%), and asparagus (14%).

The habits and preferences of Hispanics have impacted the American market, so Mexican products are no longer only exclusive to Mexicans living in the United States.

Multicultural consumers have been identified as the fastest growing and most dynamic segment of the US consumer economy, driving more and more Americans to consume products from diverse cultures, such as Mexico.

Among ethnic or regional foods, Mexican food is the second most preferred by Americans after Italian and surpassing Chinese, Mediterranean, and Japanese (sushi).  Mexican food is the third most popular type of menu in the United States and represents almost eight percent of all restaurants operating in this country, with more than 57,000 establishments, according to data from the National Restaurant Association (NRA).

For its part, the Mexican restaurant industry in the United States is dominated by independent restaurants, where approximately 74 percent of Mexican food restaurants in the nation are independent, with nine or fewer establishments per company. 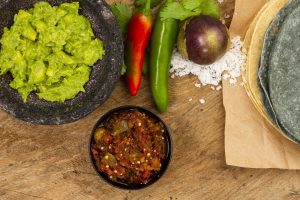 We can mention the other most popular Mexican food chains or franchises, which are Qdoba Mexican Grill, Del Taco, and Moe’s Southwest Grill, respectively.  The states of California and Texas dominate in terms of the total number of Mexican food restaurants, with more than 36 percent of the establishments of this type.

We can conclude by saying that the five most exported Mexican products to the United States are beer, tomato, avocado, tequila, and pepper.  These products are already part of the customs and consumption habits of North American citizens.

If the border is closed to Mexican products, there is no supplier with the same characteristics to supply the largest market in the world, the United States.  On the other hand, Mexico increased its surplus of products from the automotive sector with the United States continuously, considering the first quarter of each year since 2009, reaching 24,926 million dollars in the period from January to March 2022, according to data from the United States Department of Commerce.

Mexico has achieved sustained growth in the positive balance of its automotive balance with the United States despite the interest of then-President Donald Trump to reverse that trend, as well as the economic impacts of the Covid-19 pandemic and the global shortage of fuel semiconductor chips.

The surplus in the sector has remained in favor of Mexico, with US exports of 8,991 million dollars and Mexican sales of 33,917 million in bilateral trade in the first quarter of 2022.

The economic analysis confirms the relevance of Mexico as the main trading partner of the United States and shows that our country represents an important economic and commercial ally in North America. Likewise, the result of the economic analysis reiterates that both governments can resolve their commercial differences through dialogue and technical cooperation.

The commercial alliance between both countries was endorsed on July 1, 2020, through the entry into force of the Treaty between Mexico, the United States of America, and Canada known as T-MEC or USMCA.  Dr. Alejandro Díaz Bautista, International Economist and Research Professor at El Colef.