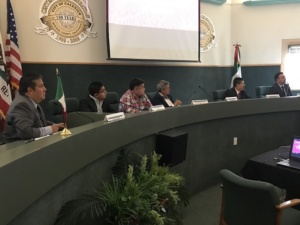 In an effort to have a better communication regarding the traffic of firearms from the Imperial Valley into Mexico, the Mexican Consulate in Calexico hosted a forum with authorities from both sides of the border to inform the public about the actions taken so far.

It is estimated that 70 percent of illegal guns enter Mexico and it is important that local, federal, and state law enforcement agencies work together to minimize this problem.

According to statistics, in 2018, the Mexican government recorded more than 30,000 intentional murders. Twenty thousand of those murders were committed with firearms.

Twenty percent of all homicides in Mexico were related to organized crime, according to a study from the University of San Diego, though the study noted the estimate was conservative and the figure was likely higher.

Mexicans have a right to own firearms, but legal purchase from the single Mexican gun shop in Mexico City, controlled by the Army, is extremely difficult. Guns smuggled into Mexico are sometimes obtained at gun shops in the United States and carried across the US-Mexico border.

In other cases, the guns are obtained through Guatemalan borders or stolen from the police or military. Consequently, black market firearms are widely available. Many firearms are acquired in the U.S. by women with no criminal history, who transfer their purchases to smugglers through relatives, boyfriends, and acquaintances who then smuggle them to Mexico a few at a time.

The U.S. government, primarily through ATF, ICE and Customs and Border Protection, is assisting Mexico with technology, equipment, and training. Project Gunrunner is part of the ATF’s effort to collaborate with the Mexican authorities and its “cornerstone” has been the expansion of eTrace, a computerized system to facilitate tracing guns that were manufactured in or imported legally to the U.S.