Congress Votes to Impeach President Trump for The Second Time 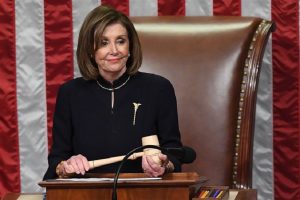 The House of Representatives on Wednesday voted to impeach President Donald Trump for his role in the deadly U.S. Capitol siege by his supporters, making him the only president in U.S. history to be impeached twice.

Trump is charged with “incitement of insurrection.” The impeachment proceedings came one week after the violent, pro-Trump mob breached the Capitol, sending lawmakers into hiding and revealing the fragility of the nation’s history of peaceful transfers of power. Five people died, including a Capitol police officer.

Speaker Nancy Pelosi said it was crucial for the nation to impeach Trump since she said he was a danger to the country.

The House voted on Tuesday night to formally call on Vice President Mike Pence to use the 25th Amendment to strip President Trump of his powers after he incited a mob that attacked the Capitol, as lawmakers warned they would impeach the president on Wednesday if Pence did not comply.

Vice President Pence is ruled out invoking the 25th Amendment to remove President Donald Trump from power, less than a week after the president fomented the violent insurrection at the Capitol.

In a letter sent to Speaker Nancy Pelosi, Pence said that he would not invoke the 25th amendment since it will not be the right move for the country.

“Last week, I did not yield to pressure to exert power beyond my constitutional authority to determine the outcome of the election,” Pence wrote in the letter. “And I will not now yield to efforts in the House of Representatives to play political games at a time so serious in the life of our nation.”

Pence continued, “Just a few months ago, when you introduced legislation to create a 25th Amendment Commission, you said, [a] President’s fitness for office must be determined by science and facts. You said that we must be very respectful of not making a judgment based on a comment or behavior that we don’t like, but based on a medical decision.”

Pence encouraged Congress to avoid actions to “further divide and inflame the passions of the moment” and to focus on smoothing the transition to President-elect Joe Biden’s administration.

Senate Majority Leader Mitch McConnell’s office said the Kentucky Republican will not bring the Senate back early to hold an impeachment trial for President Donald Trump. Democrats have said they worry a trial will drag into President-elect Joe Biden’s term and hamstring his early agenda.